The bill hook (Fig. 1) is a traditional agricultural cutting tool with a curved blade used widely in agriculture and forestry for cutting smaller woody material such as shrubs and branches. Also used for hedge construction and maintenance, and for use in coppicing and woodlot management. The hooked blade is sharpened on the inner curve. The blade is thicker than the blade usually found on a machete or a sickle 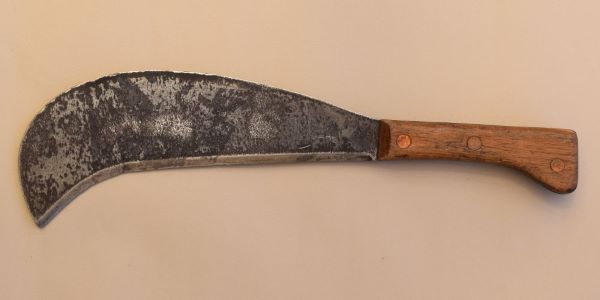 During the medieval period a weapon similar to a bill hook was used by English soldiers. It consisted of a pole with a bill like blade. Some had a spearhead or a spike added to the back of the blade to increase the versatility of the weapon against cavalry and armour. The English in particular were known for using massed billmen rather than pikes or halberds in the Renaissance period, notably at the Battle of Flodden in 1513, when the Scottish king James IV was felled by an arrow and bill.

WW1
The bill hook or Hook, Bill if you use current military nomenclature is of particular significance to the Australian collector as it is one of the few items of blade ware known to have been produced in Australia for World War one.

The manufacturers that I have been able to identify are:
GH Bishop (Fig 2) and
HV Mckay Sunshine Harvester Works. (Fig 3) 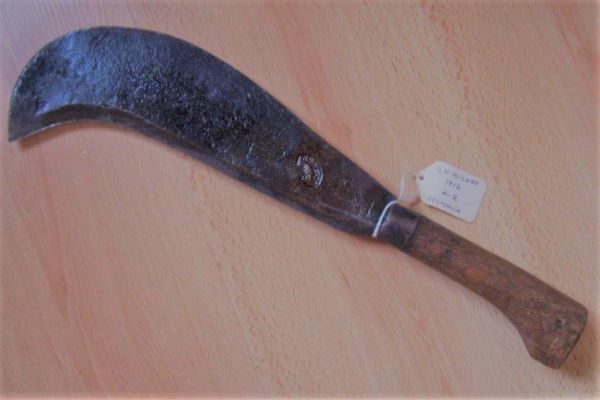 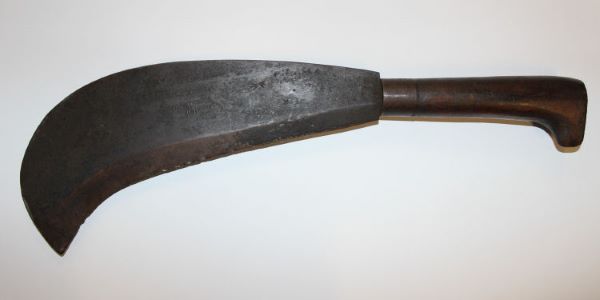 
WW2
Marsden Products Pty Ltd
According to the research published by Keith Spencer in his book "Australian and New Zealand Cutlers and Cutlery 1788 - 1988" the only WW2 maker that he could actually identify was Marsden Products Pty Ltd. This was from the Government Gazette records. I am not aware of any Marsden marked bill hook being in any collections.

These bill hooks (Fig 4) show no makers marks. One however carries a military acceptance mark as well as an Inspectors mark (Fig 5). There are some minor differences between the three bill hooks which would indicate different makers but it seems certain that they have been made to the same standard pattern. 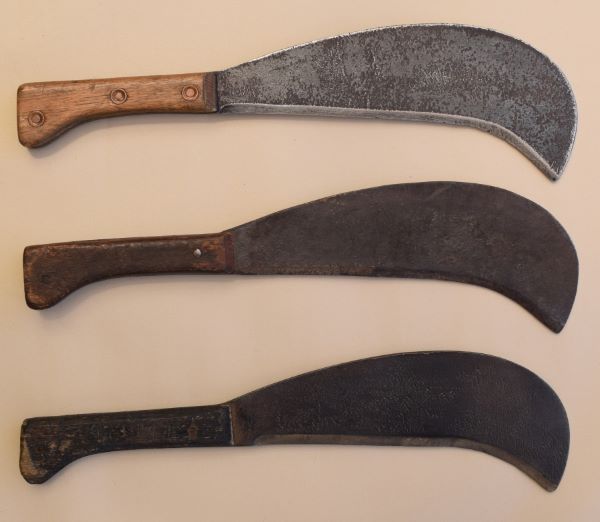 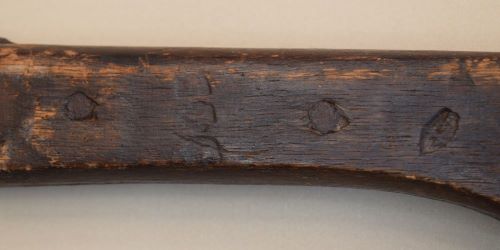 
A fellow collector Graham Gough recently helped me obtain a British made bill hook of WW2 vintage (Fig 6) that has had an interesting journey. It was made in 1943 by John Perks and Sons of Wolverhampton in England and probably sent to Australia shortly thereafter. It must have sat in storage for at least 25 years until someone came along and added the NSN sticker to it sometime after the late 1960's. It then continued to sit in storage for perhaps another 25 years until it was marked for disposal. The new owner did not put it to use and it sat in storage again for another 25 years. 75 years after being made it found a home in my collection; still in its protective coating and with its original grease proof wrapping. The bill hook is clearly marked Perks 1943 along with the Inspection Mark of a Pheon. This marking indicates its acceptance for use by British Forces. The NSN 5110 66 049 4467 on the label indicates that it was for use by Australian Military units. The bill hook also carries the original label reading “CLEAN WITH WHITE SPIRIT OR SIMILAR WHEN REQUIRED FOR USE”


Where and by whom were they used?
This was a mystery for quite some time. I was fortunate enough to have some communication with Jack Neville a collector and restorer of military vehicles and a foremost authority on Ford/Marmon Herrington gun tractors. Jack was able to confirm that the bill hook was a part of the equipment that served the 25 pound field gun in WW2.

Jack has provided me with a diagram of the layout of the No: 27 Limber (Trailer Artillery No: 27). (Fig 7) Item No: 4 can be clearly identified as a bill hook. 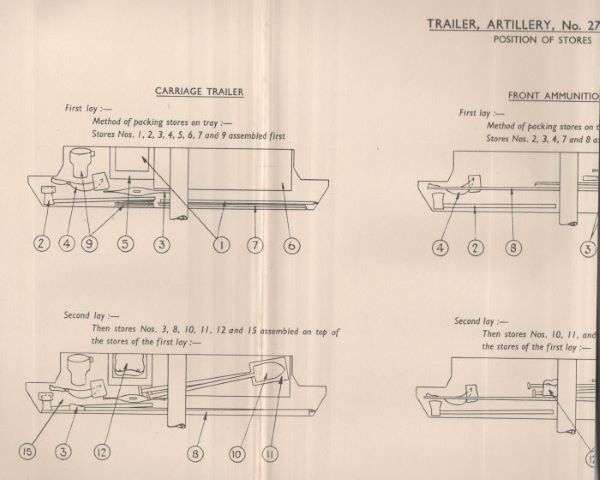 
Following on from the information provided by Jack, I contacted a colleague who served in the Royal Australian Artillery during the Vietnam War and he confirmed that he knew the Hook, Bill well and that "In Malaya and Vietnam all Artillery Guns had a Hook, Bill as part of the CES.”

Clearly the bill hook has had a long association with the Artillery. There is a Model of a British offset Limber for 12 pounder Armstrong Breach Loading gun in the Australian War Memorial Collection. The 12 pounder Armstrong Breach Loading gun was used by some Colonial Military units. They also saw service in New Zealand in the Maori wars. There is clearly a bill hook along with an axe, pick and a shovel as part of the equipment.

There can be little doubt that the Ordnance Quick Firing 18 pounder Field Gun used by the Australian Artillery in World War one was equipped with a bill hook. The Australian made bill hooks may have been purchased just for this use.

Again, a fellow researcher, Gerard Hogan has come to my aid. He has found an early document: “List of Changes in War Materiel and of Patterns of Military stores, which have been approved and sealed, with instructions relating thereto.” Printed under authority of his Majesty’s stationary Office by Harrison and Sons London 1919. That makes reference to a Case, Bill Hook, Leather of which there was one per Limber. Keeping in mind that this was a list of changes there was no need to refer to the bill hook that went in the case.

So far I have only been able to associate the use of the bill hook to the Artillery. Everyone who has been on the Gun Line would be familiar with them. However I would not be surprised if there was a wider usage. I suspect that the most likely other user of the bill hook would be the Engineers.

I would be very interested to find out if any other units were issued with the bill hook. If you have any other information on their use, please .

Good luck with your collecting!

This information was featured in the Australian Knife Magazine, Issue 8 June - August 2019 in the Military Collector column.