During the First World War, Australia had no established cutlery industry like the Sheffield and London knife makers. The need to fulfil the requirement for blade ware for the Australian Imperial Forces (AIF) was mostly filled by the British cutlery industry.

Every soldier, sailor and airman was issued with a clasp knife as part of their personal equipment.

There were three basic patterns of clasp knives made by the British cutlery industry for issue to the services. While there were some variations I intend to deal only with the most common varieties.

In 1913 the British Army approved a specification for "KNIFE, Clasp, with Marline Spike and Tin Opener" which was known as pattern No: 6353/1905 (fig. 1). This pattern was made by various manufacturers. 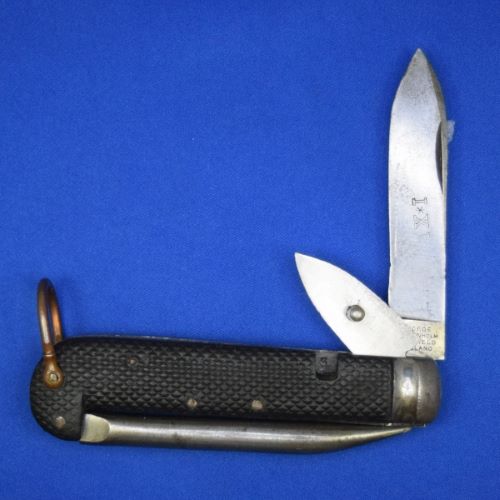 
The British pattern 6353/1905 knife was one of the patterns issued to members of the Australian Imperial Force during the First World War. The knives issued to members of the AIF were described as "Knife, clasp, with marline spike, tin opener" in The Recruits Companion. As the description is effectively the same as the specification for the British 6353/1905 knife, there can be little doubt that it was this pattern knife.

In this photo (fig. 2) of two unidentified engineers of the Australian Light Horse, pumping water from a Turkish well (AWM B02757), a clasp knife can be seen hanging from the belt of one of the Diggers. 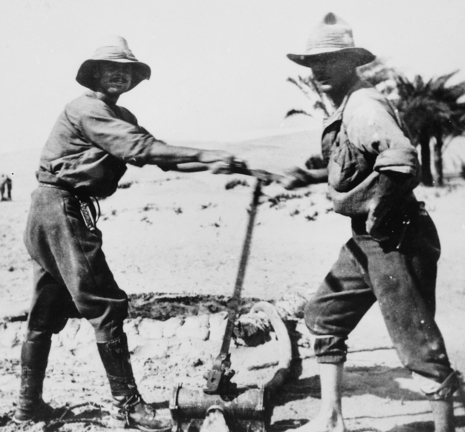 
There can be no doubts that the British pattern 8173/1914 clasp knife, 'Knives, Clasp with Tin Opener and Bone Scales' (fig. 3) was also one of the patterns issued to members of the Australian Imperial Force (AIF) during the First World War. There are also several variants of this pattern but the knife with the jigged bone scales is the most common. These knives were made by many makers. 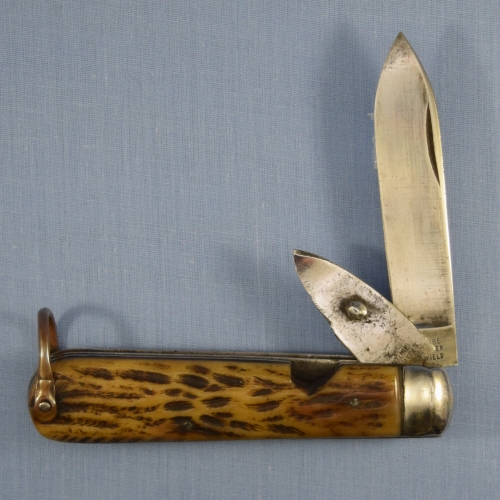 
So far little actual documentation has been found to describe what the issues were. It seems from recent research that the British pattern 8173/1914 clasp knife was first issued to Australian troops training in Egypt for Christmas 1914 and this was most likely how the term Gift Knife came about. A letter home from Private Fred Messer contained the information “The Australian High Commissioner to Great Britain Sir G H Reid presented to the troops while in Egypt a pocket knife to each of them (allotted by the Commonwealth Government) as a Xmas Box for Christmas 1914”.

These knives differed from the British Pattern 6353/1905 clasp knife in that they did not have a "Marline Spike". They have only a blade and a tin opener. While they had the makers name on them they did not have any military markings. The fact that the knives have no military markings means little. Evidently clasp knives were considered items of clothing and for some reason were not often marked. Research has revealed that the pattern 6353/1905 clasp knife that was very definitely an issue item is very rarely found with military marks either. To date, the only examples of the pattern 8173/1914 knife that I am aware of with military marks are most definitely faked!

The British Admiralty Pattern 301 (AP301) clasp knife came in to service with the Royal Navy in about 1910.

The AP301 is a distinctly different clasp knife, it is a very solid knife; it has an incredibly strong spring. The AP301 has a sheepsfoot blade and a marline spike that both hinge from the same end, with stag scales and a copper shackle to affix a lanyard to (fig. 4). The AP 301 is a very attractive knife in its own right. 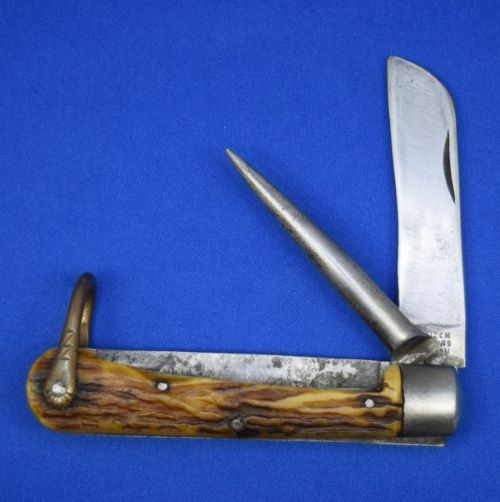 
Because the Royal Australian Navy and the Royal Navy had very close ties at the time, Australian sailors would also have been issued with this knife.

A variation of this knife was produced from about 1932 when the stag scales were replaced with chequered alloy scales and there is evidence that they were still being issued to the Royal Australian Navy by the start of the Second World War.

The Australian Flying Corp (AFC) formed during the First World War was part of the AIF. As such they would have certainly been issued with the same clasp knives as the Diggers, the pattern No: 6353/1905. I am aware of one clasp knife attributed to a member of the AFC which is a variant of the pattern 6353/1905 (fig. 5).


Australia did manufacture bayonets for the First World War. These were the pattern 1907 bayonet (fig. 6) that was made for the Short Magazine Lee Enfield Rifle. The pattern 1907 bayonet was made in Australia at the Lithgow Small Arms Factory. Initially the bayonets’ were fitted with a hooked quillion for catching the blade of an opposing soldier in close combat. The hooked quillion was discontinued after 1915. The 1907 pattern bayonets continued to be made in Australia up until the 1950’s


The Bill Hook (fig. 7) or Hook, Bill if you use military nomenclature was made in Australia for the Australian Military forces in the First World War. The Bill Hook is a traditional cutting tool that is used for cutting smaller woody material such as shrubs and branches. The manufacturers that I have been able to identify are:
GH Bishop and
HV Mckay Sunshine Harvester Works. 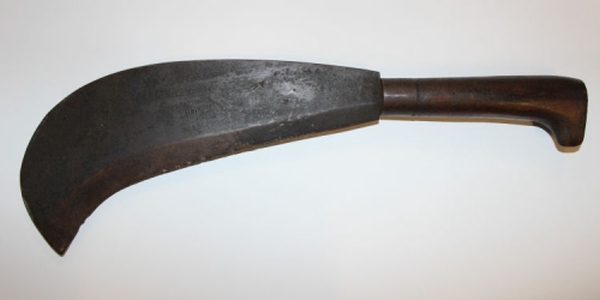 
The only application that that I have found for the Bill Hook was that it was part of the equipment supplied with the Quick Firing (QF) 18 Pounder Field Gun. A Bill Hook was included in the equipment carried on the Limber (A limber is a two-wheeled cart designed to support the trail of an artillery piece). The QF 18 pounder was used by the Royal Austral Artillery prior to the First World War and there is a good chance that Australian made Bill Hooks found their way in to the limber.

Knife fork and spoon sets (KFS) were also on personal issue. Even though I have no information I feel I must at least mention the humble KFS set. Without which the ordinary Digger would have been unable to feed himself. To date I have been unable to confirm what the members of the AIF were issued with.

Hope that is useful.

This information was featured in the Australian Knife Magazine, Issue 6 November - February 2019 in the Military Collector column.