One of the really satisfying aspects of collecting Military bladeware is the research that you get involved in.

Some time ago I researched the story behind the WW1 knife known to collectors as the Red Cross Gift Knife.

This clasp knife has a single blade, a tin opener and jigged bone scales (fig. 1). The blade is about 2.75” (70 mm) long and with the blade closed is about 4.125” (110 mm) overall. They are a sturdy, well made knife and many Sheffield makers are found among them. The story that follows these knives is that they were not Military issue but were included in gift parcels distributed by the Red Cross during WW1. 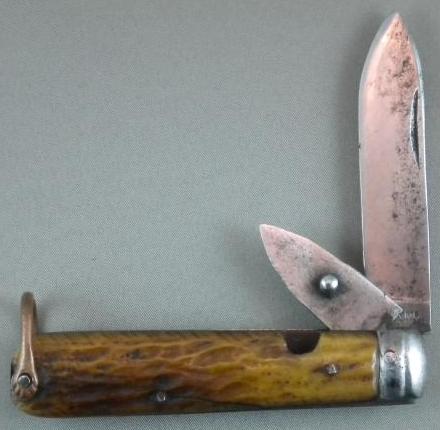 So, was it in another Gift Tin/Box?
The main contender was the Princess Mary Gift Box (fig. 2), intended to be distributed to all serving personnel for Christmas 1914. The Imperial War Museum (IWM) provided a lot of information. The Gift Boxes were made of brass and were supplied primarily with cigarettes and tobacco in them. There was also a box for non smokers and a version for nurses (chocolates and candy) and other versions taking in to consideration the ethnic background of the troops they were to be issued to. Amongst all of the items described as having been in the boxes, a clasp knife was not one of them.

There was one reference when referring to shortages, that a knife was substituted. But the knife is not described and must only have been in very small quantities. 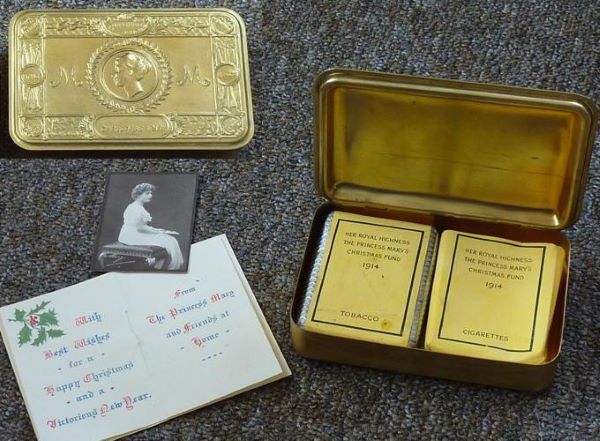 
The IWM also informed me:
“Having conducted a preliminary search, I'm afraid I could not locate any examples of or information about clasp knives that were issued as part of a gift set.”

A Gift Box was issued by Queen Alexandra but this was only issued to Household Regiments.

References were found to other unit specific gifts and civilian based gift tins that contained chocolate and/or smoking supplies and/or writing materials.

No clasp knives were mentioned in any of these.
There was a Gift Tin issued to Australian troops by the Australian War Contingent Association, London (fig. 3).

A clasp knife was not among the gifts distributed. Mostly the gifts they gave were to improve the soldiers comfort. 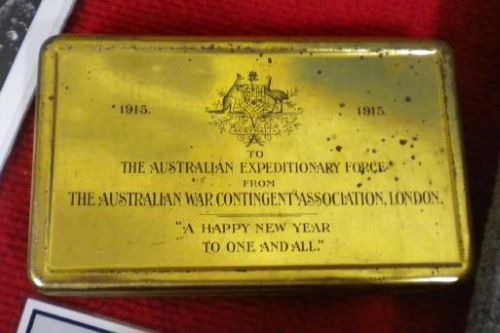 
Chris Pollendine, a long time collector of Gift Boxes made these observations:
“I have collected soldiers gifts for years, but have never come across any reference to your knife at least not in the context of British gifts, which is my field.” “I can state that Queen Alexandra's gift never included a knife.”

In relation to the knife substituted in the Princess Mary Gift Box when there were shortages he observed “What sort of knives are not mentioned. I have found a couple attributed to gift tins and these have been very tiny pen knives (3" approx.) (fig. 4) certainly not your knife.” and “they all had issue clasp knives anyhow why bother?“ 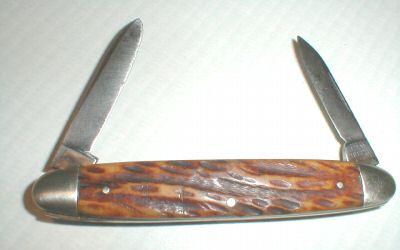 
Finding out what clasp knives were issued to Australian troops was not easy.
The Recruits Companion dated June 1918 which was given to all new members of the AIF describes “Knife, clasp, with marline spike, tin opener” (fig. 5). This description fits the pattern 6353/1905 clasp knife (fig. 6). This establishes what was being issued towards the end of the war, but not the early stages. 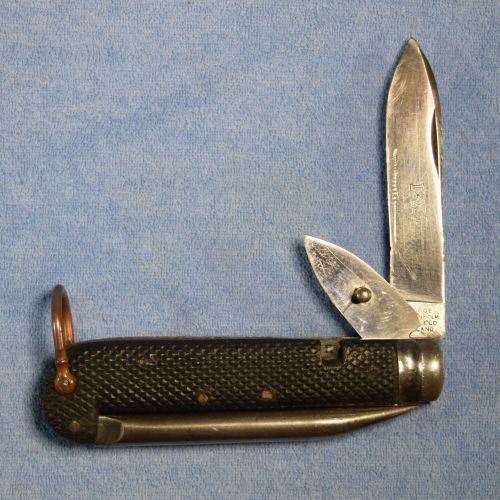 
For a long time it was believed that the Gift Knives were not a military pattern. Another researcher, Joe Sweeney, provided information that the Gift Knife was in fact pattern 8173/1914 (single blade, tin opener with jigged bone handle) and was indeed a British issue knife. Joe also discovered an issue scale for the British Expeditionary Forces, that states that knives without marline spike are to be issued to Infantry (and other dismounted troops).

The absence of any legitimate W/l\D stamp has caused collectors confusion. As a result, for many years it has been the belief of many, that the pattern 8173/1914 clasp knife was not an issue item and that the only explanation for it to be in the possession of soldiers was that it was a Gift. Lawrie Wilson an Australian collector who has been collecting these knives for over 30 years has yet to find any with verifiable military acceptance markings.

Joe Sweeney discovered that lack of W/l\D stamps is not an indication of not being purchased by the Royal Army Clothing Depot (clasp knives were considered an item of clothing) as not all items so purchased were stamped.

I have observed that many pattern 6353/1905 clasp knives in collections do not have acceptance marks. Perhaps too much emphasis has been placed on this point!

At this stage I was of the opinion that the term Gift Knife was a misnomer. That the name had come about because collectors believed that unmarked Clasp Knives were not an issue item and could only be explained as gifts.

A breakthrough!
In March 2015, I received an enquiry from Trevor Williams whose great uncle, Fred Messer, was killed at Gallipoli. One of the four items returned to the family was a pocket knife that had been handed out as a Christmas Gift to AIF troops in Egypt by the High Commissioner of Australia to the United Kingdom, Sir George Reid prior to the Gallipoli landing. Trevor asked if I knew of these knives and was hopeful I could provide an image that could be circulated among the relatives to find if Fred’s knife still existed.

Trevor directed me to an article from the Nepean Times (Penrith, NSW) Saturday 20 February 1915 which featured an article “Letters from the Front” which included excerpts from letters written home by local boys. This article contained the most useful piece of information yet found in the letter from Private Fred Messer: “Private Messer gleefully refers to the visit of Sir Geo Reid, and says that the High Commissioner's (Sir G H Reid) present of a pocket knife to each of them (allotted by the Commonwealth Government) as a Xmas Box, was much appreciated. Over 10,000 knives had been given out, and more to follow, at the time Private Messer despatched his letter."

Trevor also provided a small photo of Fred Messer showing a clasp knife attached to his belt (fig. 7). The enlargement (fig. 8) while not very clear certainly appears to be the pattern 8173/1914. 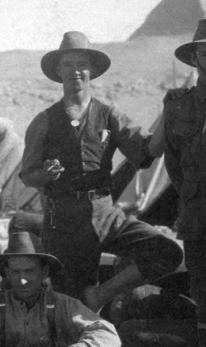 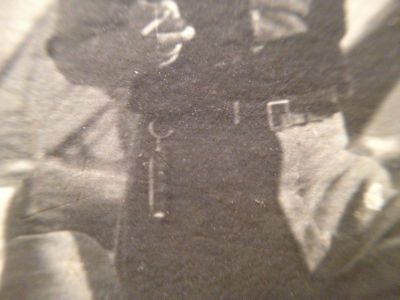 
It is quite logical that after these knives were gifted to the diggers that they simply became known as Gift Knives and the story became a little confused as time passed.

The moral of this story is never accept on face value what you get told about bladeware. It is not uncommon to encounter misunderstanding and misinformation. Always remain quietly sceptical and seek provenance and verifiable information.

This information was featured in the Australian Knife Magazine, Issue 5 August - October 2018 in the Military Collector column.