Kukris were issued to RAAF flight crew members flying with the RAF in Burma as a survival tool in case they were forced to bale out in to the Jungle. 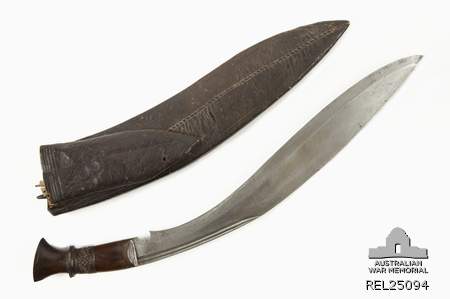 So far, I have been unable to find any evidence of use by Army personell during WW2.

I have received information that Kukri's were issued to Army Reserve Commando units in the 1970's.

I have also been informed that NORFORCE (North-West Mobile Force), an infantry regiment of the Australian Army Reserve, formed in 1981 and is one of three Regional Force Surveillance Units (RFSUs) employed in surveillance and reconnaissance of the remote areas of Northern Australia has been issued with these knives.

I have no idea of the scale of issue or manufacturer for any of these Kukri's. I would appreciate any help anyone can provide me. Particularly with photograps of the Kukri's