Australia produced several types of machetes during the war. The British Bolo pattern with plastic handle and known as Machet 15" is the most commonly found.

Australian manufacturers produced the M1942 US pattern machetes for the US as well. These machetes are not often seen in Australia.


The machete most commonly used by the Australian Army during WW2 were the (British) Bolo style of machete.

This Machete is by Gregory Steel Products, Melbourne and is complete with the original scabbard. 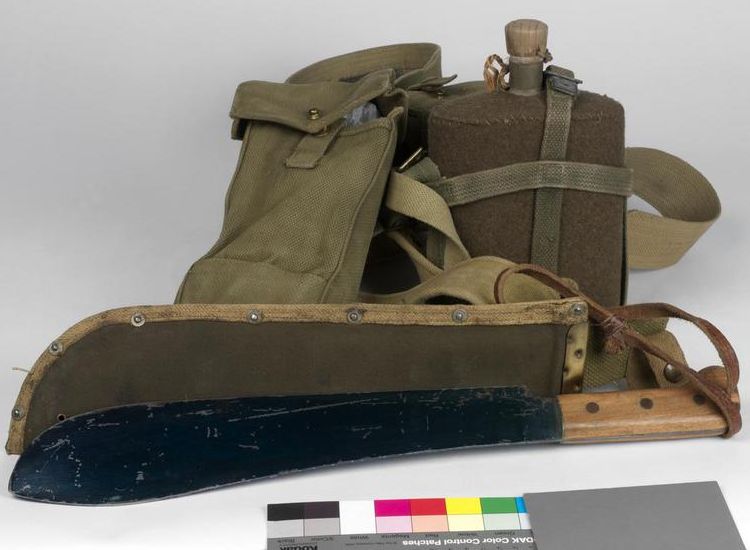 This machete is in the collection of the ©IWM

This Machete is by Scott Trojan & Sons, Victoria. It is 20 1/4" overall length with a blade 14 3/8" long. It has wooden handles. It is not dated and I have no information when they went in to service, or over what period.

There are examples from unknown makers. These machetes bear no makers mark and may only have only Military acceptance marks. This first machete has only D/l\D stamped on the blade. 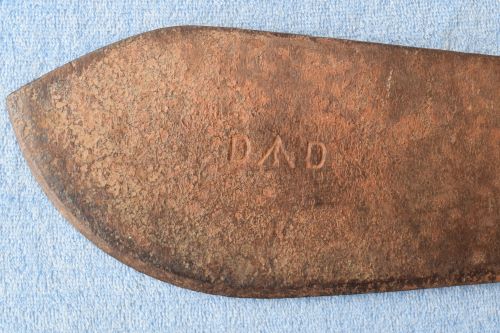 This machete has no makers mark and all that can be found is an Inspectors mark on the handle. . 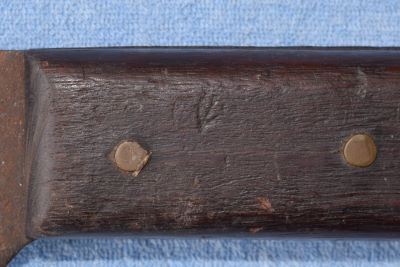 
This is the most commonly encountered Australian WW2 machete. This machete has bakelite handles instead of wood as used previously. It is normally found with a canvas sheath, evidently a leather sheath was issued prior to the adoption of the canvas sheath

This machete is marked D /I\ D above DC 45. Examples are also found with 44. This is believed to be the year of manufacture.

From the Kennington collection


My research has led me to believe that the manufacturer of these machetes marked DC was Die Casters Pty Ltd a Melbourne based firm.

I believe that the manufacturer of the machetes marked MP was Marsden Products Pty Ltd of Sydney.

Because of the distinct similarities between the two machetes I believe that production of both occurred in the same factory. Die Casters were precision moulding specialists and because of this some researchers doubt that they are responsible for the DC marked machetes. I have recently been made aware that Marsden Products were a Division of Lysaght Works Ltd. Did Lysaght manufacture the machetes for both Marsden and Die Casters at their Port Kembla factory?

If anyone has any information that can help me, I would very much like to hear from them. Please


During WW2 Australia makers produced a distinctive long machete for the Australian Forces. This machete was completely different to the previous bolo machetes. The machete has a 19 inch (43 cm) blade and a simple wooden handle.

I am aware of three manufacturers:

Whittingslowe Engineering in Adelaide produced this distinctive long machete for the Australian Forces during WW2. It is marked WHITTINGSLOWE ADELAIDE over D/I\D. I have no information on the sheath that would have accompanied this machete.

This very large Machet has been referred to as a "Parang" by eminent researcher Keith Spencer. I am aware of this machete being made by three Manufacturers,

The machete was issued with a very robust leather scabbard.


This machete is unmarked. 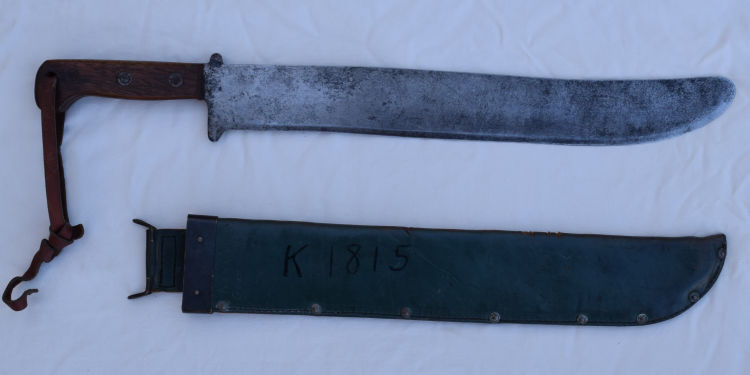 
A survival machete for issue to air crews was manufactured in Australia during World War 2. These machetes' were issued to USAAF as well as Australian air crews.

The survival machete was made by several manufacturers:


Not all examples carry makers marks.

These machetes are found in two basic versions. One has Aluminium grips, the other has wooden grips. 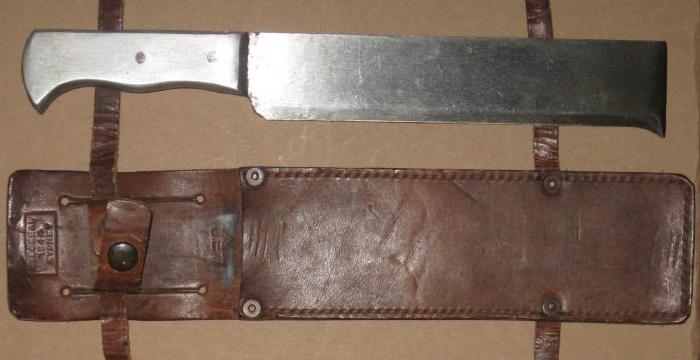 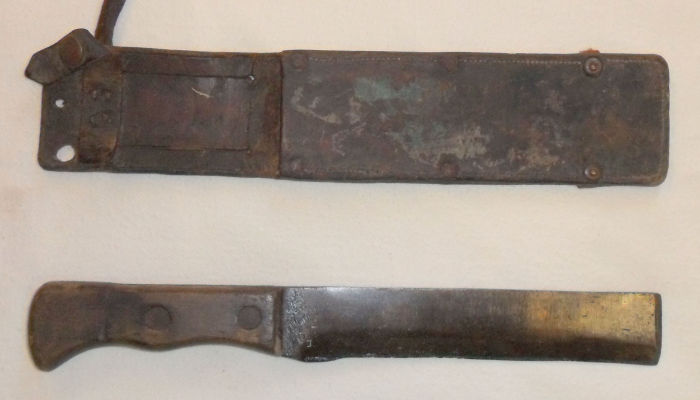 This Air Crew Survival Machete was issued to Flight Lieutenant David Jones while serving with 100 Squadron RAAF in New Guinea in 1945. It is by Scott Trojan.

On 15 August 1945, Flt Lt Jones and crew were returning from a bombing mission when informed over the radio that the war was over. This meant that their mission was the last one for their Squadron and one of the last missions of the war against the Japanese. The machete featured was part of his flying kit and was being worn by him at that time.

On 13 September 1945, Flt Lt Jones and members of 100 Sqn were part of the guard at the ceremony for the surrender of the Japanese Forces in New Guinea at the airstrip at Cape Wom, Wewak, New Guinea where Lieutenant-General Hatazo Adachi, Commander 18 Japanese Army in New Guinea, formally surrendered to Major-General H.C.H. Robertson, General Officer Commanding 6 Division.

The machete is now on display in an RSL sub branch museum. 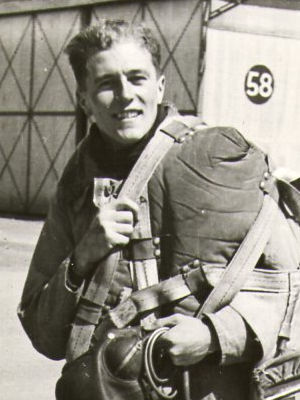 Flight Lieutenant Jones when an instructor at Point Cook

These Machetes' were still being held in Australian stores up until the late 1960's. I have heard from one Australian Infantry Soldier who, while he was deployed to Vietnam in the late 1960's was issued one from the Q store by the staff who had a supply of them. Feeling it was a pretty useless piece of kit for infantry use, he just left it with his gear. On his return to Australia he had a knifemaker convert it in to a knife as a souvenir of his deployment. 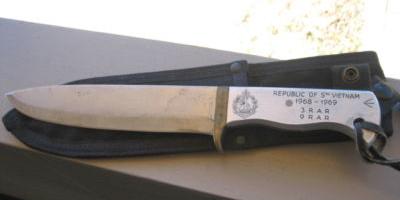 From a private collection


The US folding Aircraft Survival Machete came as part as the survival equipment on the US B25 Mitchell Bombers that were supplied to the RAAF during WW2. I understand that it was fitted to the back of the navigators seat.


A similar machete was made by the British duirng WW2 for fitting to their aircarft. It is fair to assume that these machetes would have been fitted for British aircaft supplied to the RAAF during the war.


This pattern machete was manufactured in Australia during WW2 for US forces. It most likely saw service with Australian troops as well.

The examples I am aware of are marked:


Both leather and canvas sheaths have been noted with these machetes.

From the Bartel collection 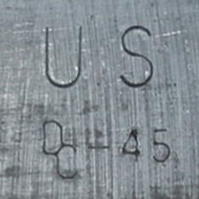 Machetes have been found marked both 44 and 45.

From the Bartel collection 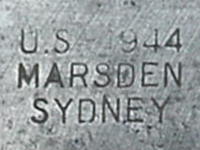 
This machete appears to be based on the M1942 pattern and was manufactured in Australia during WW2 for US forces. It may have been used as an Air Crew machete and it may have been more convenient for use in heavy jungle. Any information on this machete would be appreciated.

The only example I am aware of is by Marsden.


Markings found on this machete 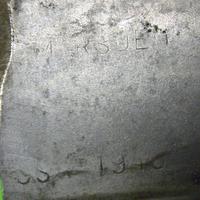