A Smatchet is a short, heavy fighting knife/sword 16 1/2" (42cm) in overall length (including grip). It was designed by knife fighting expert and instructor Capt. William E. Fairbairn during World War II. and was believed to be based on the Royal Welch Fusiliers Trench Knife of World War I, and was designed as a pure combat knife. The large leaf shaped blade which is 11" (28cm) long sharpened the full length on one side, and from the tip to half of the other side. It weighs about 1 1/2 lbs (about 700gm)

Smatchets were issued to Special Operations personell such as Z Special. There is one in the collection of Army Museum of Western Australia which saw service with Z Special.


This smatchet is currently on display in the Australian War Memorial in Canberra in the Second World War Gallery. This smatchet was carried by Corporal R. T. Petteit, whilst a member of "Z" Special Unit. 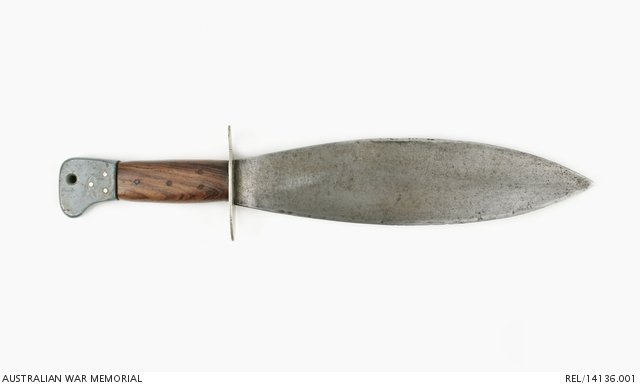 ©Australian War Memorial
This Smatchet is in the collection of the

This smatchet was carried by Warrant Officer First Class Richard Perry MM, whilst a member of "Z" Special Unit.

The Smatchet is in the possession of the Perry family