There are many other Utility/Combat knives that I suspect that Australian Service Personel used during WW2; finding evidence of them has proven difficult.

The Mark 2 combat/utility knife came in to service with US servicemen in 1943 and has been used in every conflict since and is still in use today. This knife was made by several manufacturers. But for some reason the name KaBar (trade name of Union Cutlery Co.) has become synonomous with this design.

The Mark 2 is a very sturdy knife. It weighs about 20 ounces, its overall length is 12 inches with a blade length of 7 inches by 1 1/4 inches deep with a stacked leather handle.

Knives used by Australian servicemen would have been aquired from US personnel.

A fine example of the early Mark 2 Combat/Utility knife with the blued blade from the Union Cutlery Company branded KABAR. Later production knives were the Parkerised finish.
Courtesy of the Bill Walters collection


This image is in the archives of the Museum of the Australian War Memorial. It was taken at Noemfoor Island, Dutch New Guinea on 2 July 1944 and shows Flight Lieutenant G. J. MCGuire, RAAF, preparing his lunch with a Mark 2 Combat/Utility knife. 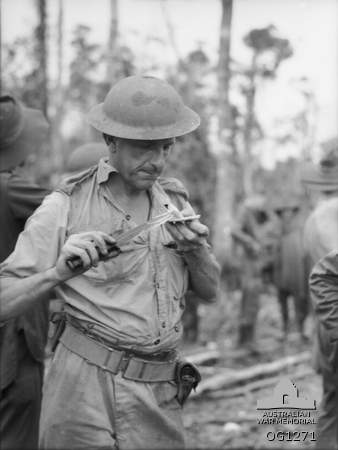 ©Australian War Memorial
This image is in the collection of the